Bungling Burglars: Caught out by Clothes 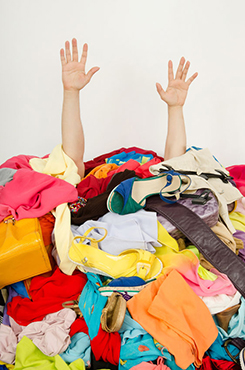 We have brought you various stories of bungling burglars before (here and here): the criminal cretins caught out by their own stupidity; but it seems that for every one that is hoist by their own petard, there are several waiting to take their place.

We always follow these stories with interest but a few have caught our eye lately that seem to have a common theme – all were caught out in some way by clothing!

This burglar was caught in the act rifling through his victim’s cupboard. He got away but not before she noticed his unusual underwear, revealed by his low strung trousers. His pants were adorned with a pattern of donuts, burgers and fries and this was included on the statement made to police. Some days later a man was arrested on a different charge and while getting changed in his cell, revealed these same distinctive pants. This tied the crimes together and the victim was able to identify him. We bet those were no longer his lucky pants after that! See the story here.

Some footwear is definitely more appropriate for the beach than a robbery as one man in Australia discovered. There he was, happily robbing a supermarket, when one of his flip-flops got snagged on a trailing cable and sent him crashing to the floor, spilling all the loose change he had in his hands flying. He then struggled to stand up due to the flip-flop/coin combo and resembled something of a cartoon character, all captured on CCTV. See the story here.

You don’t need to be a master criminal to know that wearing gloves during a break in is probably a good idea but what if you don’t have any on you? Well this enterprising intruder thought on his feet, or possibly just looked down at them, and decided to re-purpose his socks as gloves. And then climb a ladder. While drunk. Unsurprisingly it didn’t end well and he soon fell off the ladder and knocked himself out cold (though presumably his hands were still toasty in his socks). See the story here.

Here we have two similar stories of careless crims making a mess and landing themselves in a bigger one. The first tipped a bag of flour over the floor and the second a tin of paint. Both managed to walk through the mess and leave a trail of footprints, right to their respective front doors.

Could he BE wearing any more clothes? 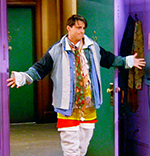 Do burglars ever worry about overdressing for the occasion of a break in? This one apparently didn’t. For some reason, instead of stuffing his victim’s clothes into a bag, he decided the best way to get them out of the property was to wear as many of them as he could. To cut a long story short, he was spotted and pursued and tried to escape by jumping into the nearby river. Unfortunately, swimming and several layers of clothes don’t go together well and he soon began to struggle under the weight and had to be rescued. See the story here.

Charity is a one way thing

Or so it would seem as a man attempting to steal from a charity clothes bank fell in but then was unable to get back out as the chute was too difficult to pull back down from the inside. It was only when the emergency services decided to cut their way in that he managed to find the resolve required to grab it. See the story here.

While we obviously make light of these scenarios here, burglary is really not funny if you are on the receiving end and can have a significant financial and emotional impact on victims. Sadly, most burglars are significantly better at it than these guys here and it’s much better to prevent it happening than to deal with the consequences afterwards. If you would like advice on how best to keep your home secure then please call us on 0356 833 5543 or send us a message.

0
0
0
0
0
0
previous Could a burglar be caught by his walk?
next Is your house an open invitation?
Make an enquiry
Sign up to our newsletter!