The History of Calder Security in Wakefield

Home / About Us / The History of Calder Security in Wakefield 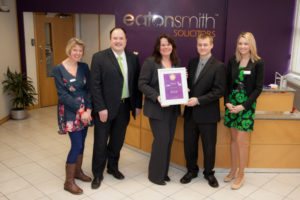 Calder Security was founded in 1976 as a lock and safe business, serving the domestic market. It grew reasonably steadily over the years but remained a small business, continuing to focus on the home market.

Meanwhile Simon Cook was embarking on his career as an electrical engineer. Having seen his father build and run a successful business, Simon always had ambitions to own a business himself at some point, leaving school at 16 and starting an apprenticeship. On qualifying as an electrical engineer three years later, Simon applied for a position at Calder Security but was actually turned down. He took a position with a general electrical contractor instead but a year later in 1998 another vacancy became available at Calder Security and this time he was successful; starting out as an engineer and working his way up to Contracts Manager over the next four years.

In 2006 the owner decided to sell the company and retire and Simon saw his opportunity to fulfil his ambition of running his own company. He could also see a huge potential in creating a more streamlined business. At the age of 26 he bought the business that had at one point turned him down and set about transforming it.

A New Era for Calder Security under New Management

While Simon had been trying to implement improvements over the years in his role as Contracts Manager, he now had no restrictions and soon put in place a number of strategies to take the business forward.

As he saw it, there were several things that were holding the business back including inefficiency, lack of data and a low profile. In the first year he set about dealing with these areas; setting up new IT systems and implementing better marketing. The change that had the most impact, however, was the company-wide improvement in efficiency. Delays between completing jobs and invoicing were cut right down, engineers’ time was planned better, enquiries were dealt with faster and proper systems were put in place across all areas of the business.

By the end of the first year he had taken on new engineers, bought new vans and increased turnover by 38%. Profits were re-invested into the business; new tools, new technology, new machinery etc; all to help the engineers be more efficient.

Simon believed strongly that the key to the future success of the company was to move into the commercial security market and operate at maximum efficiency. Both of which were achieved.   Greater efficiency allowed the company to minimise operating costs and the commercial market created much larger profit margins. Simon’s policy from the start was to take on no debt through financing; everything was bought outright from company profits.

Every decision made and strategy adopted has been with a long term view in mind; continuing to train engineers to the highest of standards and always staying abreast of industry changes, taking on no debt, investing in marketing and developing the right on-going maintenance contracts as a business offering; have all contributed to creating a cash rich business that has the flexibility to adjust prices and services as the market demands.

From 2 engineers in 2006 the company now employs 12 members of staff.  With no debt and lean operating costs due to efficiency, this puts the company in an incredibly strong position.