The Top 20 UK Cities… for Burglars 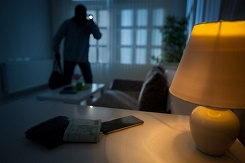 Doncaster, Bradford and Leeds among the most burgled areas

We have 3 cities in our region in the top 20! Sadly, that’s not a good thing as the top 20 we’re referring to is the house break-in hotspots for 2014. Moneysupermarket looked at the number of claims per 1000 home insurance quotes provided through their website for 2014 to create the list. Perhaps unsurprisingly, Greater London features most prominently with its regions occupying 13 of the 20 spots on the table including the top position for Dagenham (RM8 postcode).

It’s not all bad news though; the YO16 area of East Yorkshire made it to number 13 on the table of the places least likely to experience a break-in with just 1.66/1000.

So, what’s the solution? Well we advise all people living in Doncaster, Bradford and Leeds to move to Bridlington…

… of course that’s not exactly a practical answer so if you do live in one of those postcode areas (or even if you don’t) the only line of defence you have is to do what you can to protect your home from burglars. We’ve shared a number of tips on preventing a break-in previously on the blog (here’s the most recent post) and these are all good things to try and stick to but by far the most effective deterrent you can use is a functioning, properly installed burglar alarm.

Any would-be intruder checking out these contained areas (and they tend to be affluent areas where the potential haul is greatest) will naturally choose properties that present the lowest risk and greatest ease. They are much more likely to have a go at a house that does not have an alarm than one that does. It’s that simple.

0
0
0
0
0
0
previous Steven's running for Candlelighters
next Insecure about Burglary?
Make an enquiry
Sign up to our newsletter!