Security solution pays for itself at Ackworth Garden Centre 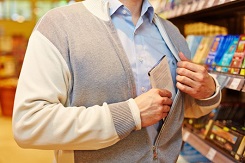 It has been reported recently that Ackworth, a small village near Pontefract, has been the target of multiple thefts and break ins recently with 15 burglary offences reported since July. One Ackworth business was itself a victim of theft when it approached us a couple of months ago.

Simon Harpin from Ackworth Garden Centre reached out to a few security companies to try and find a solution for the theft issues that were costing his business hundreds of pounds. Firstly, they were experiencing frequent thefts of plants from the outdoor areas of the premises; a perpetrator accessing the grounds over the fence and stealing large quantities of plants to order. Secondly, there was a big problem with shoplifting from the retail unit.

Simon invited a few security companies to survey and quote for a security solution to crack down on these problems. While ours wasn’t the cheapest quote, Simon appointed us because he felt that we were the only ones who really took the time to understand the issues he was having and put some thought into how they could be tackled.

Our MD, Simon Cook, put a package together that included various measures to deal with the two types of theft.

To deal with the outdoor thefts we proposed beam protection – lasers that cover the outdoor area but can’t be seen – coupled with a Master Blaster which is an extremely loud audible alarm. An upgraded alarm system was installed to the main building complete with monitoring and police response.

To deal with the shoplifting we proposed high quality IP CCTV cameras. This gave us a two-pronged approach: a visual deterrent to prevent incidents and good quality images that would capture footage of shoplifters so that they could hopefully be caught/identified and prosecuted.

Screens showing camera footage are visibly displayed in key areas of the shop, sending out a clear message that CCTV is in operation. Staff were also issued with iPads linked to the system so that they can check cameras from anywhere in the store and look out for people behaving suspiciously.

The outdoor thefts had been happening on a monthly basis prior to this and sure enough, another was attempted after the measures were put in place. This time their luck ran out. As soon as they jumped over the fence, the lasers triggered the breach and the Master Blaster alerted not only the police, but most of the village too! The perpetrator was caught on camera jumping straight back over the fence and has not returned since.

The measures taken to deal with the shoplifting have also enjoyed the same sort of success. In general, shoplifting is down and several people that have still taken their chances have been caught and prosecuted on the basis of the evidence captured by the system.

Not surprisingly, Simon is very pleased with the solution that we implemented:

“We have been very impressed by Calder Security’s service. Simon Cook was brilliant: he has given us the benefit of his considerable experience to come up with a cost-effective solution to what was becoming an enormous security problem for our business. The engineers who fitted the equipment were also very good; everything was fitted on time and without any hindrance to our business. Calder Security wasn’t the cheapest, but it wasn’t the most expensive either. After talking with Simon I felt instantly confident that they would be able to help resolve our ongoing problems with theft.

Since the installation, we have successfully caught and prosecuted 4 shoplifters and it has also revealed, and helped prevent, a big problem of petty theft by regular ‘customers’. The back-up is also good: whenever we have called, any issue has been resolved instantly. The service has been excellent.”

Clearly, an all-encompassing security solution such as this was a significant investment for the company, however it has more than paid for itself in the reduction of cost of theft since it was implemented.

0
0
0
0
0
0
previous Alarm Service Engineer Required
next Extra Christmas presents for burglar-catching-kids!
Make an enquiry
Sign up to our newsletter!