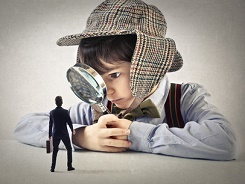 Three 9 year old children have had their quick thinking rewarded with an extra Christmas present each for helping to catch a burglar who stole an 88 year old woman’s funeral savings. (See the story here). The incident took place in Whitby a few weeks ago. Children feature heavily in this story as the burglar, Robert Franklin, took along his own pre-school age children as a cover and left them waiting outside the house as he robbed it. The older children spotted the younger ones on their own and were concerned for their safety so went over to speak to them – just as their dad was fleeing the scene of the crime. Thinking that something wasn’t right, they found one of the victim’s neighbours who raised the alarm.

But their good deed was not yet over. The children gave a good description of Franklin, who had previous convictions for burglary, and when he was detained by police were able to pick him out in an identity parade which helped to secure a conviction.

The judge in the case was so impressed by their community spirit and quick thinking, not to mention their concern for the young children, that he awarded each of them £50 so that they could be bought an extra Christmas present each. He said:

“Anyone who witnessed the case could not fail to be impressed by the actions of these youngsters. Something should not only be said but also done to mark their actions, not only in saying what they did to alert adults and thus to this defendant being arrested, but also having the courage to come to court to give evidence in the impressive way they did.”

While this story ends well in the conviction of this callous individual, the consequences of the break-in are still being felt by the victim who was in the house at the time. It does demonstrate the importance of keeping doors locked, even while at home. Franklin had been watching the house before the incident and came back with his children specifically to rob it. The lady had prided herself on her ‘open house’ but that unfortunately made her vulnerable to unscrupulous thieves like him. 30% of burglaries involve unlocked doors and break ins always spike at this time of year as thieves take advantage of the rich pickings that Christmas brings. Always keep your doors locked at all times and don’t keep large sums of money in the house, unless it’s kept somewhere secure such as a safe (not the sock drawer!).

0
0
0
0
0
0
previous Security solution pays for itself at Ackworth Garden Centre
next 2016: A Significant Year
Make an enquiry
Sign up to our newsletter!