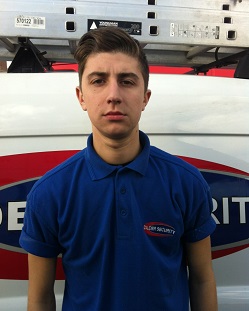 Apprentice engineer Jordan Gorner is about to embark on going it alone as a fully qualified engineer having completed his apprenticeship 6 months early. He joined the company in July 2011, shadowing our engineers and learning on the job, and he’s now gained enough experience and knowledge to start running his own jobs. It usually takes a minimum of 3 years to get to this stage so it’s a real achievement that he’s done it in less than 2 and a half years.

Jordan spoke about his time at Calder Security so far:

“I’ve really enjoyed learning the trade and all the engineers have been really supportive. I’m now looking forward to this new phase and putting all that knowledge into practice.”

Jordan will initially take on light duties and will continue to be reviewed and supported as he makes the transition to being fully qualified. His progression in the company has created a vacancy for a new apprentice and we’re now inviting applications for it.

“We’re really pleased with the progress that Jordan has made. We dedicate a lot of resources to making sure we get the apprentice process right and the fact that he has completed this over 6 months early is testament to this and to Jordan’s determination and ability. We’re now looking forward to getting a new apprentice in place and growing the team further.”

Candidates interested in the position should refer to the job vacancy here.

0
0
0
0
0
0
previous Vacancy: Apprentice Engineer Required
next Win a £25 Voucher for your Feedback!
Make an enquiry
Sign up to our newsletter!