How to stop spiders spinning webs over CCTV cameras 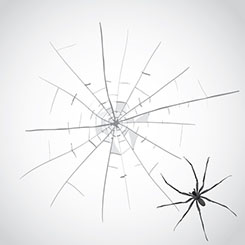 Vaseline, conkers and other novel ways to keep the critters away from your CCTV!

If you have a CCTV system, chances are you will be familiar with the issue of spiders spinning their webs across the lenses, thereby obscuring the picture. These pesky critters are often the bane of a security engineer’s life as they can also be responsible for triggering burglar alarms; a subject we’ve already covered on the blog.

The reason that spiders are attracted to CCTV cameras is because they’re after the bugs that often get trapped in them. Cobwebs across the lens of a camera can significantly compromise the images captured plus their movement can even trigger motion sensors on the system.

So, how do you keep spiders away from CCTV cameras?

There are actually a number of potential solutions out there, ranging from old wives’ tales to full on pesticides so which one you choose will depend on your ethical position on spider rights and probably a bit of trial and error as well.

Here are a few that we know of but the 3 main strategies seem to be deter them with smell, deny them purchase on the CCTV cameras or poison them. Here are some ways you can do that:

There are some smells that spiders allegedly can’t abide. These include conkers, citrus, peppermint and other strong scents. These are often easy to have in our homes generally but more difficult for outdoor cameras or to place around the immediate vicinity of the cameras themselves. Some sources suggest putting conkers or mothballs into a thin fabric pouch such as a sock or the foot part of a pair of tights and hanging it near the camera, but that might look a little odd, or fastening a drier sheet around the camera. You can place a few drops of peppermint or citrus oil on some fabric and attach that to the camera. Another idea is to spray these scents around the cameras regularly but be careful not to spray directly onto the lens as that could defeat the object of the exercise.

Or, in other words, make surfaces too slippery to crawl on or attach a web to! Many people suggest covering the casing with a lubricant which can be anything from a professional silicon spray to good old Vaseline. We’ve heard that this can be pretty effective but be careful not to get it on the lens and warn anyone who may need to handle the CCTV cameras (such as an engineer conducting a service) so they don’t smear it everywhere.

Now this one will sit better with some than others. Spiders do their bit for the eco-system and we certainly wouldn’t advocate killing them but if they’re causing a big problem (or you really just can’t stand them) an insecticide may be the solution for you and it can be pretty effective. Products such as SpiderEx spray have been developed for this specific issue. It will kill any spider that is sprayed directly (and, apparently, not in any kind of nice, gentle euthanised manner) but it would also act as a deterrent to prevent spiders going near where you’ve sprayed (if that helps soothe your conscience).  Remember though, it is a poison and should be used with caution around pets and children.

Unfortunately, none of these methods represent a permanent solution and will need to be reapplied periodically, especially on outdoor CCTV cameras.

As for which method you should try, that’s really down to you and what you’re comfortable with.

Have you tried any of these methods? Or any others not included?

Let us know what you found worked best by leaving us a comment here or over on our Facebook page.

2
1
8
0
2
2
previous What is a monitored intruder alarm?
next Calder Security Supports Ossett Beercart Festival
Make an enquiry
Sign up to our newsletter!