Don’t be taken in by bogus security engineer

Home / Blog / Don’t be taken in by bogus security engineer 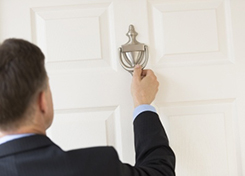 Residents of Wakefield are being urged to be vigilant following reports of a bogus security engineer scamming people in the area. See the story here. Claiming to be working on behalf of a housing association, this man has gained access to at least 2 homes to supposedly check locks and safes. He’s then stolen items and even gained a debit card from one victim that he used to withdraw money from his account. Police are appealing to any other victims in the area to come forward.

Unfortunately these kind of scammers are not uncommon and they often prey on those they perceive to be vulnerable such as older people or properties of multiple occupancy. If you live in a housing association or rented property it could be plausible that a security firm visit could have been arranged by a third party and that’s how they manage to con their way in.

Here is how to protect yourself from a bogus caller:

⇒Don’t let anyone in your home that you are not expecting. We would never just turn up at your home without having made an appointment first. We can tell you the name of the engineer that’s coming in advance and we have photos of all the engineers on the website so you can double check there

⇒If they tell you that an appointment has been made via the landlord or housing association, close and lock the door and make a call to verify with that person to investigate. Never leave the door open as they could sneak in while you are distracted. If their presence remains unsubstantiated don’t go back to the door, just call the police and wait for them to come

⇒If they produce an ID card and you still suspect they might not be genuine tell them you need to verify them, close and lock the door and call the company they claim to be from. Do not call the number on the card though as they may have somebody ready to take these calls. Find the number via directory enquiries or by looking them up online. You may find it’s a false company name as well or a genuine company who doesn’t know who they are. If this is the case, leave the door closed and call the police

⇒Make sure your back door is locked before answering the front door. Some will work in pairs and sneak in at the back while you are distracted at the front

⇒Some will claim to have made the appointment with other people who live at the address. If you live in a shared house or lodge with someone this could be plausible but please take a name and check with the person they claim to have contacted before letting them in. The same applies as above; close and lock the door and if they’re not expected, call the police

Some people feel awkward and don’t like to offend but no genuine engineer (or other kind of genuine caller) would have a problem with you carrying out these basic checks.

Likewise, never sign up for anything with a cold caller who comes to your home, even if they claim to be from a charity. If you really want to support that charity, take the details and look them up. You can then contact them yourself and support them via their usual channels.

Being taken in in this way can be extremely upsetting and you could even find that your insurance company won’t pay out if you’ve let them in voluntarily. Just a few precautions like the ones outlined above should help to keep you safe.