Family watch man burgle their home from 120 miles away 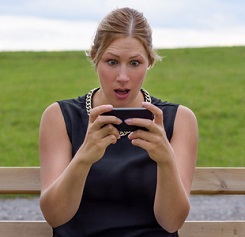 A family on holiday in Somerset was able to watch a burglary as it took place at their home at their home in Birmingham, 120 miles away. The Marusamy family had a security system installed that notified them via mobile phone that someone had set off a sensor in the garden. They were then able to watch the burglary as it happened on their CCTV cameras, including him entering the house which he did by taking a pane of glass out of the conservatory. They then watched while he prowled around the house looking for valuables to steal. See the news story.

They called the police as well as a family member who lives close by. He got there quickly and disturbed the burglar but he unfortunately got away taking several items including jewellery and passports. Obviously, this could have potentially been worse if he had been left to take his time.

With many IP CCTV systems, triggers can be built in to issue an alert to a remote device such as a smartphone. Triggers can range from sensing motion, to breaking a door contact to tampers. The images can then be viewed over the internet, effectively enabling you to live stream your burglary.

The benefits of this are that you can respond quickly, alerting the police and potentially catching them in the act. With some systems, you can even speak to whoever is in the house. This would of course let them know that they’d been caught out and they’d likely leave before the police could get there but it may mean that they would abandon the burglary early.

On the other hand, would you want to see someone burgling your home? Mrs Marusamy said “I was horrified, scared and helpless. I wish to God I hadn’t seen it unfold. It’s a violation of your own privacy.”. Many victims of burglary speak of feeling traumatised, thinking of someone going through their home: that could potentially be compounded by actually seeing them do it (though perhaps the imagining could be worse than the reality?).

Would you want to see someone burgling your home?

How would you feel about this? Would you prefer to see them doing it if it meant potentially catching them or scaring them off or would that be just too upsetting? Let us know in the comments or join the discussion over on Facebook.

0
0
0
0
0
0
previous West Yorkshire has most dog thefts outside London
next Release the Parrot…
Make an enquiry
Sign up to our newsletter!