Egg Hunt that Bagged a Burglar! 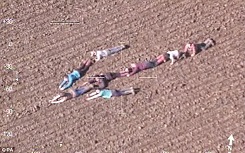 We’re all in favour of using technology to thwart burglars but sometimes the simplest solutions are the best. A group of friends, out on an Easter egg hunt, spotted a couple of suspicious looking characters running across some fields. When they saw the helicopter of the National Police Air Service (NPAS) out searching they put two and two together and decided to help as best they could by forming a human arrow, pointing the search crew in the direction of the suspects. See the news story here.

With around 9 adults and children marking the arrow out, the officers easily saw what they were doing and were able to focus their search in the right direction, soon apprehending the burglary suspects.

NPAS Sergeant, Paul Sochon said that their actions proved invaluable in finding the suspects, “The swift action taken by the group of parents and children was the sort of thing you would usually associate with an Enid Blyton adventure but their ingenuity proved a great help for our crews.”

Hopefully they went home for lashings of ginger beer afterwards!

0
0
0
0
0
0
previous Burglar alarm siren to be replaced with ice cream van tune – OK, not really!
next 40 Years 40 Facts
Make an enquiry
Sign up to our newsletter!