Does an alarm need to be working to be a deterrent?

Home / #AlarmSetGo / Does an alarm need to be working to be a deterrent? 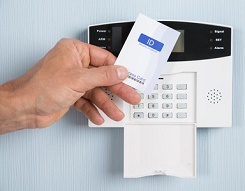 Is a visible alarm enough, even if it’s not working, not set or a dummy? #AlarmSetGo

That’s a good question as many believe that the main benefit of an alarm is the visible deterrent and it doesn’t necessarily matter whether it even works. This is certainly very relevant to our #AlarmSetGo campaign that aims to encourage those who have an alarm fitted to use it.

We would obviously make the case for a fully working alarm, regularly set when away from the house or overnight. In previous posts we’ve explained why it’s important to set your alarm and provided some solutions for the common issues that prevent people from setting it but we also thought it would be interesting to look at what other people say on the issue.

We’ve done some research: read news articles; looked at police campaigns; looked through discussion forums; and even looked at comments from burglars themselves. This is what they said:

What the Police say…

On the subject of not setting your alarm: “It is possible that the cost of an installation could be partly offset by reduced household insurance premiums. You should be aware, however, that the insurer may stipulate that the alarm should be set at all times when the property is unoccupied, and that any claim for losses incurred as a result of a break-in while the alarm was not set may be adjusted accordingly.”

This highlights the potential risk of an insurance claim being rejected if they believe you didn’t act in accordance with the terms of your policy.

“Burglars will look to see if there is an alarm installed. They want an easy target and will generally stay away from alarmed properties. But remember you need to activate the alarm for it to work, even at night time! Set the zones and protect your home whilst you sleep. After all, why spend all that money installing an alarm and not use it? Forget about dummy systems; the burglar has probably seen them too! “

This stresses the importance of setting an alarm and not relying on a dummy alarm to act as a deterrent.

What a Victim says…

The following is an opinion and a response that was part of a discussion forum on the Money Saving Expert website on the value of dummy alarms:

“To be honest, I don’t think they [burglar alarms] are any use at all….real or not. How many times have you heard a house alarm go off…and instead of running to the scene or dialling the police – you actually just curse the home owner for their faulty alarm?”

“I disagree with this. My parents had a break in within a week or so of moving into their current, previously vacant, house. Luckily they’d installed an alarm as soon as they moved in – when the alarm went off the thieves legged it, and all my parents had was a broken window and some disturbed ornaments on the windowsill.”

These victims discovered that just having an alarm was not a sufficient deterrent, with the burglar no doubt taking the risk that the alarm would not be working or not set. On triggering it, they soon thought better of it and left the scene – just showing that the alarm was very effective in this case.

“If an alarm looks old and rusty, you think it probably won’t work or you can take it out easily. We also worked on the assumption that if the homeowners didn’t care enough about protecting their houses to install a decent alarm, put up net curtains or use decent locks on the doors and windows, we were more entitled to break in.”

“Buy one from a reputable, well-known company. Burglars bypass the cheap systems and spot dummy alarms a mile off.”

“You’d be surprised how many home owners position a mirror in their entry hall so I can see from a window if the alarm system is armed.”

These comments show that burglars really do know what they’re doing and while the average member of the public would not be able to spot a dummy alarm or recognise one that isn’t set, that doesn’t mean that a professional burglar won’t.

These comments, taken from various sources, really do demonstrate why it’s so important to make full use of your burglar alarm – an action that is often more about modifying behaviour than spending money. So, if you do have a home burglar alarm then please make the effort to use it consistently. It might make all the difference.

0
0
0
0
0
0
previous #AlarmSetGo: Common Burglar Alarm Problems…
next Neighbour’s Alarm Driving You Crazy?
Make an enquiry
Sign up to our newsletter!